From Distillers Wiki
(Redirected from Retort)
Jump to: navigation, search

Diagram of a Thumper 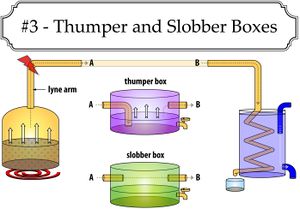 Diagram of a Thumper/Slobber box

A thumper, or doubler, is sometimes used to increase the purity of distillate without having to redistill or to flavor the distillate. The vapour from the still is directed into a jar (or some other container) of liquid below the liquid level and condenses. As more vapour comes into the thumper, the temperature increases and the liquid evaporates again, effectively redistilling it. It is then condensed by the usual method.

Similar to the thumper is the slobber box, which contains no liquid and simply collects solids and condensate (called puke by old-timers) which have been brought up with the vapour. A slobber box can help reduce the amount of congeners produced by a relatively inefficient still. 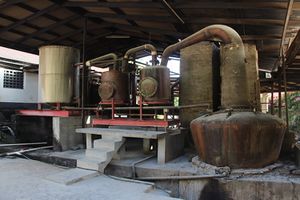