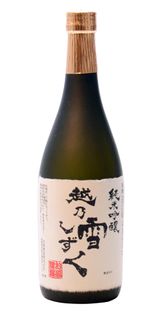 Sake (pronounced "SAH-KEH" in Japanese, but often "SAH-ki" by English speakers) is a Japanese alcoholic beverage, brewed from rice.

The history of sake can be traced back to the 3rd century in Japan. The first sake was called kuchikami no sake,or "chewing-in-the-mouth sake," and was made by an entire village chewing rice, chestnuts, and millet and spitting the mixture into a tub, allowing it to mold. Then the moldy mixture was combined with freshly cooked grain and allowed to ferment. The resulting fermentation produced a much stronger alcohol content than simple fermentation, as higher levels of starch digesting enzymes (especially amylase) in the mold allowed more sugars to be available to the yeast (This method was used also by American Natives; see cauim). Chinese millet wine,made the same way, is mentioned in inscriptions from the 14th century BC as being offered to the gods in religious rituals. Later, from approximately the 8th century BC, rice wine,with a formula almost exactly like that of the later Japanese sake, became popular in China.

Centuries later, chewing was rendered unnecessary by the discovery of koji-kin (麹; Aspergillus oryzae), a mold whose enzymes convert the starch in the rice to sugar, which is also used to make soy sauce. This inoculated rice is called kome-koji, or malt rice. A yeast or related micro-organism is then added to convert the sugar to ethanol. This development greatly increased the sake's alcohol content; as starch is converted to sugar then alcohol in one instantaneous process, unusually high alcohol levels (18% by vol.) can be obtained from yeasts with low alcohol-level ratings. World War II also altered the recipe, when rice shortages forced brewers to develop new ways to increase their yields. By government decree, pure alcohol and glucose were added to small quantities of rice mash, increasing the yield by as much as four times. 95% of today's sake is made using this technique, left over from the war years, though connoisseurs say that the best sake is still made with just rice, kome-koji, and water.

There are four basic types of sake, created by slightly varying the ingredients.

By varying the brewing process, many different types of sake can be created. Sake that has not been pasteurized is referred to as namazake or kizakeis best served chilled, and may be made with any of the above ingredients. The classic home-brew style of sake is called "doburoku" and is traditionally a cloudy milky color, as the most delicious flavors are found in the white residue. "Doburoku" is created by adding steamed rice at the end of fermentation, starting a second fermentation and raising the alcohol level. It is also un-pasteurized. By creating a starter-culture of micro-organisms, a higher-quality brew is possible, called boutique sakes, or "nigorizake". The starter-culture, called "moto" is stored at 5-10°C, allowing the lactic acid micro-organisms to become dominant in the culture. Lactic acid is important to flavor and preventing un-wanted infections. Initiating a brew with a starter-culture, and adding additional batches of steamed rice and "kome-koji" also increases the alcohol levels slightly.

In Japan sake is served cold, warm or hot, depending on the preference of the drinker, the quality of the sake and the season. Typically, hot sake is consumed in winter and cold sake is consumed in summer. It is said that the alcohol in warm or hot sake is absorbed by the body more quickly, so drinking sake warm was popular during and after World War II to mask the roughness of the flavor due to difficulty of obtaining ingredients. Sake is one of the few alcoholic beverages that is regularly consumed hot.

The most common way to serve sake in the United States is to heat it to body temperature (100°F/40°C), but professional sake tasters prefer room temperature, and chilled sake (50°F/10°C) is growing in popularity.

Sake is served in shallow cups, called choko. Usually sake is poured into the choko from ceramic flasks called tokkuri. Other, more ceremonial cups, used most commonly at weddings and other special occasions, are called sakazaki. Drinking from someone else's sake cup is considered a sign of friendship, or to honour someone of lower status.

Sake is often drunk as part of Shinto purification rituals (compare with the use of red wine in the Christian Eucharist). During World War II, Kamikaze pilots drank sake prior to carrying out their missions. Today barrels of sake are broken open during Shinto festivals and ceremonies or following sports victories: this sake (called iwai-zake, literally "celebration sake") is served freely to all to spread good fortune. Sake is also served during the light meal eaten during some Japanese tea ceremonies.