Musings on a Gin Head

Musings on a Gin Head

Now that I can consistently make good vodka, I think I want to add a botanical basket to my Bok in order to make gin. I like the vapor infusion method only because Bombay Saphire is my gin of choice (God's too, I'm told) and that is their method. So here is the direction I'm going but I'm looking for suggestions before I start soldering.

I have this. It is a stainless strainer that came with a funnel I bought. I never use it. It fits nicely to a 2" piece of copper tube and I can silver solder it in place. Here it is mocked up in my Bok head (upside down). I'd have to add a coupling but it would be basically a removable, short extension tube that would hold the botanicals somewhere in the vapor path. 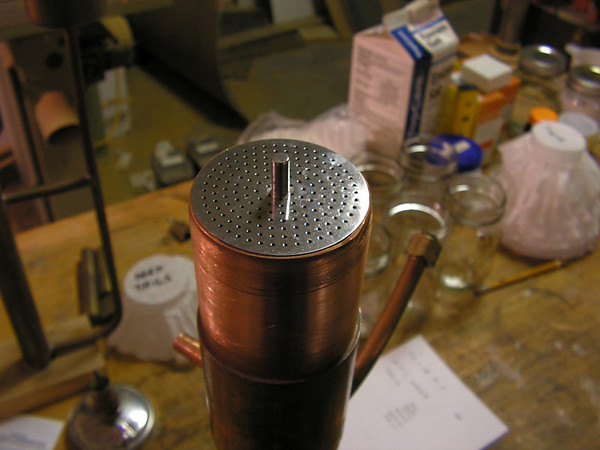 I could mount it either at the bottom of the column, at the connection to the boiler lid, or at the top of the column, above the packing and below the slant plate section. I'd have to decide the location first because the fabrication would be different depending on the mounting spot. If at the bottom, would the reflux action strip out the flavors I'm trying to put in? If at the top would I run the risk of flooding as the liquid tried to drip back through the basket while the vapor was trying to rise to the condenser.

Nice idea. Trim it well to the same diameter as your 2" tube and it will fit inside a slip coupling. Think of it as flavour enhancement thumper and put it after your column.
Bombay Saphire is very nice and they infuse 1 botanical at a time and blend later. Simpler to infuse all at once so just make sure there is enough volume in your 'basket' to cope with which ever style you pick.

I think I might be a little concerned about the liquid dripping back down on your perferated plate and plugging,then the pressure may build up... Like a pressure cooker with no relief. I am more than likely being over cautious.
KS
Top

No, KS, I don't think you are being overly cautious at all. I'm thinking if I go this route I should add a pressure relief valve or, at a minimum a pressure gauge.

First thing I'll do though is fill the basket with something - coarse ground coffee, maybe - and make sure if flows well enough to keep from flooding.

Another thought just occurred as I was typing. I wonder if the distillate dripping through the strainer plate might cool the plate and turn the plate itself into a condenser and keep the vapor from reaching the top section of the still.

It's lonely out here on the cutting edge.

Folks it is for 'vapour infusion.'

It should be in a position where there is no condensation present. For max thermal efficiency you want to have it positioned after (or above) your Bok and insulated. You just want hot vapour in contact with your botanicals.

Somewhere between theory and execution, the theory changed. After reading the comments and a couple of PMs from Kiwi I decided to forgo the idea of adding a gin head to the Boka and to use the pot still for vapor infusion gin.

Here's the botanical basket with the screen silver soldered on. It is 6" tall to the connector so there is plenty of room for the botanicals. A hard, fast water run showed me that had a tendency to flood so I enlarged the holes in the screen. Here it is inserted between the boiler and the pot column. In the meantime this box of goodness showed up. Ready to run. Charged the boiler with 5L of neutral hearts diluted to 35% and insulated the column to help prevent any accidental reflux. I ran it as low and slow as I could. It started coming off at 85% and I ran it down to 15% before shutting down, and eureka! It makes gin! Just not very good gin. I didn't pay attention to cuts since I started with all hearts and that was a mistake. Definitely has tails in it. I also have to play around with the botanical ratios, but that is to be expected. Right now it needs more juniper and less licorice. All things considered, though, I think I'm on the right track and happy to know that the rig will do what is intended.
Braz
Top

Bravo! You'll have the cutting and botanicals down in no time.
Three sheets to the wind!
My stuff
Top

To those who weren't privvy to your PM's leading you to the pot still method, can you shed light on why the basket in a Boka is no good? I've been thinking of getting an actual hanging basket (a small 2" wire mesh seive), and hanging it from the condenser of my boka, just above the slanted plates.

montanadave wrote:To those who weren't privvy to your PM's leading you to the pot still method, can you shed light on why the basket in a Boka is no good? I've been thinking of getting an actual hanging basket (a small 2" wire mesh seive), and hanging it from the condenser of my boka, just above the slanted plates.
Any insight?

Well, it was this post from Myles that called into question my first idea. "Folks it is for 'vapour infusion.'

It should be in a position where there is no condensation present. For max thermal efficiency you want to have it positioned after (or above) your Bok and insulated. You just want hot vapour in contact with your botanicals.

I think your idea would suffer from the same problems as my initial idea. In a Bok there is no good place to put the gin basket to keep it from being soaked with returning condensed liquid. That flavored liquid then drops down the column till it is re-distilled and returned up the column -and so on. But with each re-distillation flavor is removed. So you are in something like an endless loop, adding flavor at the top with your gin head and removing it farther down the column. I came to the conclusion that a LM (Bok) still was just not the right tool for vapor infused gin. I think a VM still with the gin basket in the output path, before the condenser, would be the right tool but I didn't want to build one just for gin. So I opted to just make a good clean neutral and then run it through the pot with the gin basket at the bottom of the column. Works pretty good but I'm still futzing with my botanical balance. It ain't Saphire yet.
Braz
Top

I've been working on a way to accomplish this same concept -- incorporating a botanical basket into a boka and sketched up this rough concept. Does anyone see any issues with this idea where some of the vapor path bypasses the column through the basket then joins above the plates?

You would need something to force the vapor to go through the basket area or once the botanicals get wet the vapor would be blocked and just go through the plates area and bypass the basket. Probably want the basket in-line with the column above the plates but below the reflux condenser. Then you need a bypass tube that would flow around the basket for return, something like a vapor locked J tube downcomer so the flow can get back past the botanicals.
Current Evolution:
MrDistiller > 2" potstill > copper 4" perf 4 plate flute

Good point. So, what if the basket was a smaller diameter than the pipe, allowing vapor to flow around it as well as through it?
Top

It would not flow through, once the basket contents got wet and packed down the vapor would take the path of least resistance and just flow around. You need to make the vapor have no other path but to flow through the basket. It will push up through the botanicals like on a plated still pushing up through the liquid held on the plate of the still. It forces the vapor to bubble through the liquid forcing a mix but also allowing a downtube to let excessive fluid flow back through the vapor block. That's what you would need to build in this configuration.
Current Evolution:
MrDistiller > 2" potstill > copper 4" perf 4 plate flute

So then, I would think if you wanted to have the maximum of vapor infusion and minimum liquid infusion, the best place for the basket would be the bottom of the column where the hottest part of the column would be?
Top

That might work for a very light gin. I believe in the bottom of the column where the reflux returns you would get the flavors washing back into the boiler. Where you ideally want it is where the vapor takes off from the reflux condenser and flows into the final condenser. That way the botanicals avoid being washed by the reflux and are only touched by the vapor as it exits the system.
Current Evolution:
MrDistiller > 2" potstill > copper 4" perf 4 plate flute

Thanks a lot Durace11 for the enlightenment. Digging deeper for a solution, I'm thinking the OP was right that a Bokakob is probably not the right contraption for someone like me that wants to make mostly botanical infused product. But I'm pretty sure that a reflux still is the right way to go to reduce re-distillations (and time!)

So to get the benefits of the reflux and a downstream botanical basket, what do you think of this concept? Perhaps the outflow might come out the bottom, up higher? Or maybe the basket is a Tee with the input at the bottom and the top of the tee has a removable cap -- actually all of them would have a removable cap. Really appreciate everyone's insight!

There are two different products being discussed here and both have merits. I suspect a combination of the two techniques would be a good option.

There is also another issue that you might wish to think about. Do you really want botanical infused condensation getting into your packing? No reason not to use botanicals with a packed column, but I think I would remove it from directly above the column.
Top
Post Reply
17 posts • Page 1 of 1