My first run with homemade still

Many like to post about a first successful ferment (or first all grain mash), or first still built/bought or first good run of the still. Tell us about all of these great times here.
Pics are VERY welcome, we drool over pretty copper

My first run with homemade still

Thought I'd put my education to use and try my hand at distilling, I read up on the subject and watched alot of videos for about a year before deciding to start finding parts and putting my still together. Finished the still this summer but only had time to do vinegar and sacrificial runs before moving back to my appartement, so I was excited to go back home to my parents over christmass to do my first proper run

The build:
Tried to be as picky as possible when choosing the materials, only using copper, stainless steel, and alot of PTFE tape. The boiler is a 30 liter stainless steel boiler with clamps and a gasket, judging from my conversation with the online seller I think it was originally designed for distillation but it was sold as a "stainless steel fermenter". I originally used a 2kW hot plate to heat it but it was a pain in the ass to control due to cycling so I retired it and slapped a 3.5kW heating element on that bad boy and we were in business.
I somehow managed to break the lid to the boiler so I had to source a new one, but it was a blessing in disguise because of how much sturdier the whole still got from changing a 1mm thick lid to a 3mm thick lid, who would have thought. The new lid weighs a ton though.

The column is 54/50 mm copper pipe, with some tee-fittings and other parts. Decided to go for the Nixon-stone design and also putting another needle valve on the reflux tube. So I'm running 2 needle valves to control everything along with the power regulator for the heating element and cold tap water for the condenser and heat exchanger. The condenser managed the hot plate with ease but the increased power from the heating element was too much when on 100% power so I need to turn the power down a bit sooner next run. There's a hole between the inlet and outlet of the condenser to keep it from building up pressure. The heat exchanger on the end worked great and I was collecting at 11.5 C (52.7 F). Both the vapor and boiler thermometers use 6mm thermowells.

Suitable packing for the column was almost impossible to find so I bought the thickest welding cable I could find, stripped it and unwinded all the cables into a copper mesh. Seems to be working just fine.

Building this was my first time ever soldering copper pipes. The joints look like crap but they're tight and I checked the joints from the inside using a camera on a wire so they're clean on the inside.

The run:
25 liter sugar wash with 7kg of sugar and turbo yeast, fermented for just under 3 days, had to cut it short due to time restraints. If my gravity readings are to be trusted I had a ABV of 13%. Got my heat up and let it run at 100% reflux for about 30 min, I might be a bit too impatient running this still but I collected at a steady rate of about 3 drops/sec (forgot to measure) and a vapor temp of 79.2 C (174.5 F). Measuring the product told me I was collecting at 87.5%, I was able to push the vapor temp down and the % up but it was taking too long for my liking.
I found a setting that worked and kept the temperatures increadibly steady and I didn't change anything for almost the entire run. It ran for hours without changing temperature on the vapors (the boiler temperature changed ofcourse). The whole run took about 12 hours, I collected in various glass jars, most of them were 0.2 liter, some 0.3 liter. A total of 3.1 liters was collected, threw away the first 0.2 liters as foreshots, the next 0.8 liters I collected as heads, 1.9 liters of hearts and after collecting 0.4 liters of tails it was 4 in the morning and I stopped the run.
The next day I diluted and filtered the hearts in a stainless steel pipe with active carbon. Bottled it up as 43% and put them in cold storage, about 3.5 liters ready for new years eve.

When reading about peoples oppinions on sugar washes with turbo yeast I was suprised when tasting it, it tasted much better than I was expecting, even better alot of vodkas from the store.

Here's a picture of the still, don't look too closely on my soldering and sorry for the editing, realised I had some personal stuff (and friends) lying around on the picture. 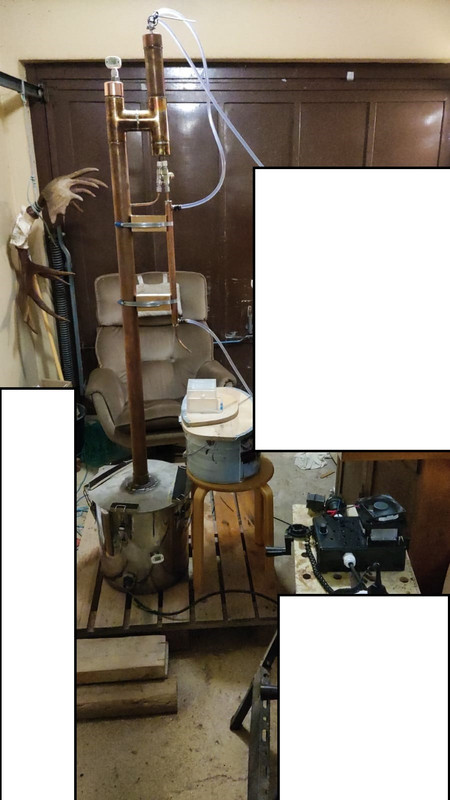 I have ALOT to learn, but I'm happy with the results from my first run. Excited to make changes and improvements to my setup, the first one should be better thermometers, one of them broke mid run and I had to borrow my fathers BBQ thermometer. Anyone got any suggestions for good digital thermometers for 6mm thermowells?