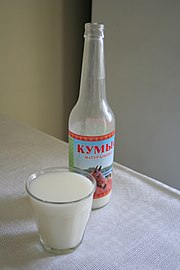 Kumis (also spelled kumiss or koumiss or kumys, see other transliterations and cognate words below under terminology and etymology - Kazakh: Қымыз, qımız) is a fermented dairy product traditionally made from mare's milk. The drink remains important to the peoples of the Central Asian steppes, of Huno-Bulgar, Turkic and Mongol origin: Kazakhs, Bashkirs, Kalmyks, Kyrgyz, Mongols, and Yakuts.

Kumis is a dairy product similar to kefir, but is produced from a liquid starter culture, in contrast to the solid kefir "grains". Because mare's milk contains more sugars than cow's or goat's milk, when fermented, kumis has a higher, though still mild, alcohol content compared to kefir.

Even in the areas of the world where kumis is popular today, mare's milk remains a very limited commodity. Industrial-scale production, therefore, generally uses cow's milk, which is richer in fat and protein, but lower in lactose than the milk from a horse. Before fermentation, the cow's milk is fortified in one of several ways. Sucrose may be added to allow a comparable fermentation. Another technique adds modified whey to better approximate the composition of mare's milk.