This is the chemical structure of a Whiskey Lactone on a glass of Whiskey. 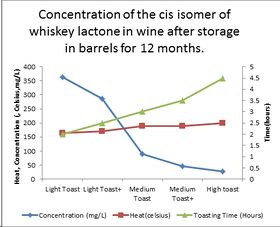 Lactones contribute to the flavor profile of whiskeys and other beverages aged in oak barrels.

The 3S,4S isomer (cis-3-Methyl-4-octanolide), commonly known as whisky lactone or quercus lactone is an important ingredient in the aroma of whiskey (where it was first identified by Suomalainen and Nykänen in 1970),and other alcoholic beverages that have been aged in oak barrels. It is sometimes added to the liquor as a flavoring agent. It has a coconut, celery or fresh wood aroma, that can be detected by humans at the concentration of 1 μg/L in air.[5] A mixture of the cis and trans isomers is repellent for mosquitos and flies.