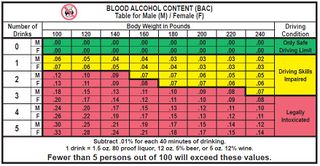 Blood Alcohol Content (or Blood Alcohol Concentration), often abbreviated BAC, is the concentration of alcohol in blood, measured, by volume, as a percentage. For example, a BAC rating of 0.20 means 1 part per 500 in an individual's blood is alcohol. In many countries, the BAC is measured and reported as milligrams of alcohol per 100 milliliters of blood (mg/100ml).

Number of drinks consumed is a poor measure of intoxication, because of variation according to body weight. One drink (unit of alcohol) will increase the average person's BAC to roughly 0.04, but there is much variation according to body weight, gender and body fat percentage. Furthermore, neither BAC nor the number of drinks consumed are necessarily accurate indicators of the level of impairment. Individual alcohol tolerance varies, and can be affected by genetic or nutritional factors, drugs, other degrees of impairment, and long-term heavy drinking.

Alcohol content in blood can be directly measured by a hospital laboratory. More commonly, for law enforcement purposes, BAC is estimated from breath ethanol content measured with a machine commonly referred to as a Breathalyzer (even though that is just the trademark of one manufacturer of the devices).

For purposes of law enforcement, BAC is used to define intoxication and provides a rough measure of impairment. Although degree of impairment may vary among individuals with the same BAC, the BAC has the advantage of being simpler to measure objectively, and therefore harder to contest, than impairment of driving.

Most countries disallow operation of motor vehicles and heavy machinery at prescribed levels of BAC, which vary both by country and by situation. In Sweden, driving with a BAC rate of over 0.02 is illegal. By contrast, the policies of the United States are much more liberal: In one state, a BAC rating as high as .099 is considered not intoxicated, though the federal government is pushing for a reduction of the limit to 0.08. In some states, drivers under 21 (the American drinking age) are considered legally impaired at lower levels (perhaps 0.02) as part of a zero tolerance policy.

In Australia, the limit is 0.05 in most states and territories, and either 0.02 or zero for inexperienced drivers (learner drivers or those on probationary licenses). It is enforced by random breath testing.

Despite the liberal intoxication limits of many countries, one should not assume that driving with a BAC rating of, say, .079 is as safe as driving while sober. At a BAC rating of 0.05, the probability of a driver having an accident is more than four times its base level. Despite this, some drivers believe their driving actually improves with small amounts of alcohol. This assertion is false, because their ability to accurately judge the quality of their driving (measured by actual motor competence) deteriorates.

Unless a person has developed a high tolerance, a BAC rating of 0.20 represents very serious intoxication (most first-time drinkers would be passed out by about 0.15), and 0.35 represents potentially fatal alcohol poisoning. 0.40 is the accepted LD50, or lethal dose for 50% of adult humans. For a long-time, heavy drinker, those numbers can at least double. In extreme cases, individuals have survived BAC ratings as high as 0.914, but only with medical attention.

Alcohol is removed from the bloodstream by a combination of metabolism, excretion, and evaporation. The relative proportion disposed of in each way varies from person to person, but typically about 90 to 98% is metabolised, 1 to 3% is excreted in urine, and 1 to 5% evaporates through the breath. A very small proportion (less than 0.5%) is also excreted in the sweat, tears, etc. Excretion into urine typically begins after about 40 minutes, whereas metabolisation commences as soon as the alcohol is absorbed, and even before alcohol levels have risen in the brain. (In fact in some males, alcohol dehydrogenase levels in the stomach are high enough that some metabolisation occurs even before the alcohol is absorbed.)

Metabolism is mainly by the group of six enzymes, collectively called alcohol dehydrogenase. These convert the ethanol into acetaldehyde (an intermediate that is actually more toxic than ethanol). The enzyme acetaldehyde dehydrogenase then converts the acetaldehyde into non-toxic acetyl-CoA.

Many physiologically active materials are removed from the bloodstream (whether by metabolism or excretion) at a rate proportional to the current concentration, so that they exhibit exponential decay with a characteristic halflife (see pharmacokinetics). This is not true for alcohol, however. Typical doses of alcohol actually saturate the enzymes' capacity, so that alcohol is removed from the bloodstream at an approximately constant rate. This rate varies considerably between individuals; experienced male drinkers with a high body mass may process up to 30 grams (38 mL) per hour, but a more typical figure is 10 grams (12.7 mL) per hour. Persons below the age of 25, women, persons of certain ethnicities, and persons with liver disease, may process alcohol more slowly. Many east Asians (e.g. about half of Japanese) have impaired acetaldehye dehydrogenase; this causes acetaldehyde levels to peak higher, producing more severe hangovers and other effects such as flushing and tachycardia. Conversely, members of certain ethnicities that traditionally did not brew alcoholic beverages, have lower levels of alcohol dehydrogenases and thus "sober up" very slowly, but reach lower aldehyde concentrations and have milder hangovers. Rate of detoxification of alcohol can also be slowed by certain drugs which interfere with the action of alcohol dehydrogenases, notably aspirin, furfural (which may be found in fusel oil), fumes of certain solvents, many heavy metals, and some pyrazole compounds. Also suspected of having this effect are cimetidine (Tagamet), ranitidine (Zantac) and acetaminophen (Tylenol).