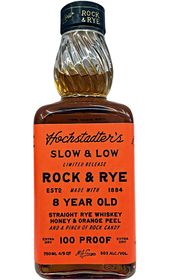 Rock and Rye is a term (both generically and brand names) for a bottled liqueur or mixed cocktail composed of rye whiskey and rock candy (crystallized sugar).

As early as 1914, United States government publications discuss disputes regarding beverages labeled "rock and rye", including a case of a beverage so marketed which was found by the Bureau of Chemistry to consist of "water, sugar, glucose, and artificial coloring matters, sold in imitation of a rock and rye cordial". Among non-alcoholic beverages, Rock and Rye continues to be a popular flavor of the Faygo brand of soda pop.