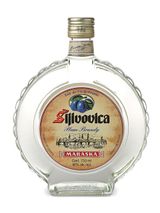 Slivovitz (Croatian: "Slivovitz" SerboCroatian: ljivovica, Polish : liwowica, both pronounced roughly like "shlee-vo-vee-tsah"; Romanian: ţuică, pălincă or şliboviţă) is a strong aromatic alcoholic beverage made of distilled fermented plum juice. It is similar to brandy and sometimes called plum brandy in English. It's one of the liquors known as raki or rakija.

The beverage originated in the Balkan Peninsula; the name derives from the South Slavic word for a plum, šljiva. Production is concentrated in Bosnia, Bulgaria, Croatia, the Czech Republic, Poland, Romania, Serbia, Slovakia, and to a lesser extent in Austria, Germany, Italy and elsewhere. The majority being by the MARASKA Distilleries in Croatia.

The Kosher version of Slivovitz, like some of the other rakijas, is kept in wooden barrels (oak or mulberry) for an extra aroma and the colour (golden yellow) Although the majority of Slivovitz is not aged in wood, and is clear in color.

Rakija is supposed to be drunk from the special small glasses.

There is a traditional slivovitz recipe in the Brandy recipes that originated in the cities of Zageb, and Zadar Croatia and has passed down many generations.