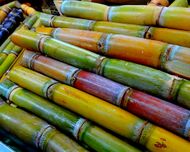 Sugarcane, or sugar cane, are several species of tall perennial true grasses of the genus Saccharum, tribe Andropogoneae, native to the warm temperate to tropical regions of South Asia and Melanesia, and used for sugar production. It has stout, jointed, fibrous stalks that are rich in the sugar sucrose, which accumulates in the stalk internodes. The plant is two to six meters (six to twenty feet) tall. All sugar cane species interbreed and the major commercial cultivars are complex hybrids. Sugarcane belongs to the grass family Poaceae, an economically important seed plant family that includes maize, wheat, rice, and sorghum, and many forage crops.

Sucrose, extracted and purified in specialized mill factories, is used as raw material in the food industry or is fermented to produce ethanol. Ethanol is produced on a large scale by the Brazilian sugarcane industry. Sugarcane is the world's largest crop by production quantity. In 2012, The Food and Agriculture Organization estimates it was cultivated on about 26×106 hectares (6.4×107 acres), in more than 90 countries, with a worldwide harvest of 1.83×109 tonnes (1.80×109 long tons; 2.02×109 short tons). Brazil was the largest producer of sugar cane in the world. The next five major producers, in decreasing amounts of production, were India, China, Thailand, Pakistan, and Mexico.

The world demand for sugar is the primary driver of sugarcane agriculture. Cane accounts for 80% of sugar produced; most of the rest is made from sugar beets. Sugarcane predominantly grows in the tropical and subtropical regions (sugar beets grow in colder temperate regions). Other than sugar, products derived from sugarcane include falernum, molasses, rum, cachaça (a traditional spirit from Brazil), bagasse, and ethanol. In some regions, people use sugarcane reeds to make pens, mats, screens, and thatch. The young, unexpanded inflorescence of tebu telor is eaten raw, steamed, or toasted, and prepared in various ways in certain island communities of Indonesia.