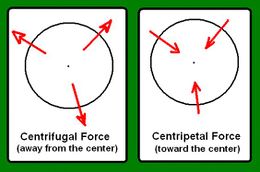 1. The force that tends to impel a thing or parts of a thing outward from a center of rotation.

2. The force that an object moving along a circular path exerts on the body constraining the object and that acts outwardly away from the center of rotation, for example, a stone whirled on a string exerts centrifugal force on the string.

Distillers use a centrifuge to separate suspended solids from beer.