From Distillers Wiki
(Redirected from Cocktails)
Jump to: navigation, search 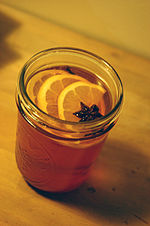 A short mixed drink. An appetizer served as a first course at a meal.

A cocktail is a mixed drink, usually containing one or more distilled alcoholic beverages and perhaps non-alcoholic drinks, ice and sometimes liqueur, fruit, sauce, honey, spice/spices etc. The cocktail became popular during Prohibition in the United States; to mask the taste of bootlegged alcohol, the bartenders at a speakeasy would mix it with other liquors and non-alcoholic drinks.

Until the 1970s, cocktails were made predominantly with gin, whiskey, or rum, and rarely with vodka. From the 1970s on, the popularity of vodka increased dramatically. By the 1980s it was the predominant base for mixed drinks. Many cocktails traditionally made with gin, such as the gimlet, may now be served by default with vodka.

Non-alcoholic carbonated beverages which are nearly exclusively used in cocktails (or in non-alcoholic soda fountain drinks, such as the egg cream) include soda water, tonic water, and seltzer. Liqueurs are also common cocktail ingredients.

The earliest known printed use of the word "cocktail" was in the May 13, 1806 edition of the Balance and Columbian Repository (A Hudson, New York publication), where the paper provided the following answer to what a cocktail was:

The first publication of a bartenders' guide which included cocktail recipes was in 1862: How to Mix Drinks; or, The Bon Vivant's Companion, by Professor Jerry Thomas. In addition to listings of recipes for Punches, Sours, Slings, Cobblers, Shrubs, Toddies, Flips, and a variety of other types of mixed drinks were 10 recipes for drinks referred to as "Cocktails". A key ingredient which differentiated "cocktails" from other drinks in this compendium, was the use of bitters as an ingredient, although it is not to be seen in very many modern cocktail recipes.

During Prohibition in the United States (1919-1933), when alcohol consumption was illegal, cocktails were still consumed in establishments known as speakeasies. Not only was the quality of the alcohol available far lower than was previously used, but the skill and knowledge of the bartenders would also decline significantly during this time. Etymology

There are several different, plausible theories as to the precise origin of the term "cocktail". Among them are:

Some say that it was customary to place a feather (presumably from a cock's tail) in the drink to serve both as decoration and as a signal to teetotalers that the beverage contained alcohol.

An alternative etymology is that the term is a corruption of coquetier, a French egg-cup which was used to serve the beverage in New Orleans in the early 19th century.