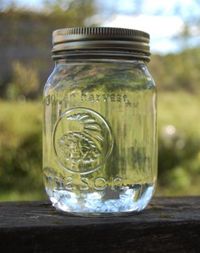 Moonshine garnered its reputation during the era of Prohibition in the United States. Practices during prohibition such as deliberately adding methanol to the spirits, not aging the spirits, and production of spirits in unsanitary conditions have skewed the general public's perception of the safety of homemade alcohol.

The name "moonshine" probably originates in the illicit roots of its own production, which was sometimes done by the light of the moon in order to avoid detection.

Also known as hooch, firewater, and mountain dew among others, moonshine is traditionally a virgin corn whiskey and when made properly is an excellent spirit which can be enjoyed directly from the still.

The literal meaning of moonshine is the light of the moon, but because the activity of distilling whiskey unlawfully was usually done at night with as little light as possible, the word became both a verb, meaning making the liquor, and a noun, meaning the liquor that was made. The reason it is done at night, and usually someplace away from houses and buildings, is that the distillation process requires heat to boil the alcoholic liquor from the "mash," so it produces a fair amount of smoke and steam, which can be visible for a great distance if it is done outdoors in the daytime. The fire can be seen at night if the still is not set up inside a building or someplace where rocks and/or trees block the view, but buildings (and caves) are not considered as safe as outdoor locations, in case of a raid by the authorities (or a competitor).

"Moonshining" means making the whiskey. Selling it, or selling legally made alcohol in an illegal manner, is "bootlegging". One person may perform both functions. A U.S. synonym for moonshine is hooch, a word apparently borrowed into English ca. 1867 from the Hoochinoo tribe of Alaska, noted for its homemade liquor. White lightning, mountain dew, and white mule are also attested.

History of moonshining in Appalachia

Appalachia, generally the rural region of the Southeastern U.S. in the vicinity of the Appalachian Mountains, has a history of small-scale whiskey production as part of its culture. Some whiskey thus produced is of high quality, while much has a decidedly utilitarian nature.

The production of whiskey in this area predates the federal taxation of alcoholic beverages. For farmers in remote parts of the country, it was a way to turn their corn into cash when grain prices weren't all that high. The imposition of a tax on whiskey was considered an unwanted federal intervention and was largely ignored. The Department of the Treasury sent special agents — "revenuers" — to prosecute unlawful distilling. While some distillers became legitimate, others did not, and many an agent and many a distiller died in the ensuing gun battles.

The grain used to make the mash, which is the mixture of grain, sugar, water, and yeast that ferments to produce the alcohol, is virtually always corn, so the product is "corn liquor" (also known as "corn whiskey"), sometimes called "mountain dew" because it appears overnight, or simply "shine". (The clear, potent (i.e. high-proof) liquor is also called "white lightning" because of its effect, or "kick".) Today, commercial hog chow is often used, because it is readily available, buying it does not attract the attention of law enforcement, and it is primarily corn, but other corn-based animal feeds can be used instead, and differences in the other ingredients in the feed impart slightly different flavors to the finished product. Ordinary white sugar is often the chief ingredient of moonshine mash, in which case the spirit distilled is technically a rum rather than a whiskey.

The federal authorities who police moonshining are traditionally termed "revenuers" because they historically worked for the Bureau of Alcohol, Tobacco and Firearms (BATF), which was part of the U.S. Internal Revenue Service until July 1972, when it became a separate bureau within the United States Department of the Treasury. When the Department of Homeland Security was created in 2003, most of BATF was moved to the new agency, but alcohol enforcement remained in Treasury, handled by the new Alcohol and Tobacco Tax and Trade Bureau.

Handling shipments of moonshine is often called "whiskey-running" or simply "running" it, by analogy to "rum-running," which originally meant smuggling rum by ship. The 1958 movie Thunder Road was about running 'shine. During Prohibition cars were "souped up" to create a more maneuverable and faster car. Many of the original drivers of NASCAR also "ran 'shine".

Moonshine continues to be produced in the U.S., mainly in Appalachia and other parts of the South. The simplicity of the process, and the easy availability of key ingredients such as a corn and sugar, make enforcement a difficult task. However, the huge price advantage that moonshine once held over its "legitimate" competition sold in licensed stores is largely gone. The volume of grain products and sugars purchased by licensed distilleries gives them such a huge advantage in production cost per unit sold over the small-batch illegal distiller that the price advantage created by the absence of taxation on moonshine is almost eliminated. Those who buy moonshine today largely do so as much or more for the thrill of obtaining and consuming an illicit product than they do for any cost savings. Also, the number of jurisdictions which ban the sale of alcoholic beverages is steadily decreasing. This means that much of the former audience for moonshine is much nearer to a legal alcohol sales outlet than was formerly the case. Moonshining is far from totally over, but is certainly far less widespread than was the case decades ago.

Sloppily-produced moonshine can be contaminated with toxins, mainly from materials used in construction of the still. Despite the well-known hazards, it is claimed that stills constructed using car radiators for a condenser are still used. The lead used in soldering these radiators ends up (http://www.cdc.gov/mmwr/preview/mmwrhtml/00016616.htm) in the moonshine, and in some cases, glycol products from antifreeze used in the radiator can appear as well. Both are poisonous.

Occasionally moonshine is deliberately mixed with industrial alcohol-containing products, including methanol and denatured alcohol. Results are toxic, with methanol easily capable of causing blindness and death.

Methanol and other toxic alcohols can occur naturally in distilled spirits and are called fusel oils. They are concentrated in the first few percent of condensate produced in a batch, and the oily consistency is noticeable to the distiller. Ordinarily this portion is discarded, though if ingested alone or included with the rest of the distlled product it may cause toxic effects. Like commercial beer, wine, and liquor, properly produced moonshine contains small amounts of methanol at levels that are not toxic. A common way to determine the "quality control" of a batch of moonshine was to see if the moonshiner would dare to drink it.

Potato-based moonshine made illegally in Ireland, is called poitín, anglicized as poteen) or formerly potheen but in Ireland. The term is a diminutive of the word pota 'a pot'.

Illicitly produced whiskey from Scotland is called peatreek. The term refers to the aroma (or reek) infused in the drink by drying the malted barley over a peat fire.

No discussion of moonshine would be complete without a nod of the head to New Zealand, where privatization of tax collection duties has led (indirectly) to the legalization of home distilling. Stills and instruction in their use are sold openly.

Due to very high taxation of alcohol, moonshining continues to be a popular albeit illegal activity in various parts of the country, especially in rural areas of the Trøndelag and northern parts of the Østlandet regions.

Although home distillation of ethanol for drinking purposes is still illegal in the United States, legislation was introduced in November of 2001 to legalize home distillation in much the same way as home brewing of wine and beer were legalized in 1978. Despite the illegal status, home distillation is growing in popularity in the U.S. with ready availability of instructions, materials and support.