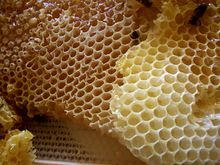 Honey is a sweet and viscous fluid produced by bees and other insects from the nectar of flowers. The definition of honey stipulates a pure product that does not allow for the addition of any other substance. This includes, but is not limited to, water or other sweeteners." as defined by the National Honey Board 2003.

Honey is actually sweeter than table sugar and has attractive chemical properties for baking. Honey has a distinctive flavor which leads some people to prefer it over sugar and other sweeteners.

Liquid honey does not spoil. Because of its high sugar concentration, it kills bacteria by osmotically lysing them. Natural airborne yeasts can not become active in it because the moisture content is too low. Natural, raw, honey varies from 14% to 18% moisture content. As long as the moisture content remains under 18%, virtually no organism can successfully multiply to significant amounts in honey.

The study of pollens and spores in raw honey (Melissopalynology) can determine floral sources of the honey. Because bees carry an electrostatic charge, and can attract other particles, the same techniques of Melissopalynology can be used in area environmental studies of radioactive particles, dust, or particulate pollution.

The flavor and color of the substance is largely determined by the type of the flowers from which the nectar is gathered. Common flavors of honey include orange blossom honey, tupelo honey, buckwheat honey, clover honey, blackberry, and blueberry honey. In Australia, Tasmanian leatherwood honey is considered a delicacy for its unique flavor. Manuka honey from New Zealand is said by some to have more special healing properties than other honeys, therefore sells at a premium price.

While it is rare for any honey to be produced exclusively from one floral source, honey will take on the flavor of the dominant flower in the region. Orange blossom, tupelo, and sourwood are favored types in the US. Greece is famous for wild thyme honey and France for lavender and Black locust (acacia) honey.

Today, New Zealand has 320,000 beehives that produce an average annual crop of 8,600 tonnes of honey. These honeys cover a huge range of flavor types and properties. From mild to very strong flavored, light to dark colored, delicately perfumed to pungent and even honeys with significant antibacterial properties.

Most commercially available honey is blended. Monofloral honeys are especially valuable on the market. New Zealand is a major producer of several of these fine monofloral honeys. Vipers Bugloss Honey, Nodding Thistle Honey, Kamahi Honey, Honeydew Honey, Tawari Honey, Rewarewa Honey or Thyme Honey are great examples. Another is Rata Honey, considered by many to be the best of New Zealand Honeys. It is very white in color, has a subtle, mild yet rich and distinctive flavor - not overly sweet, almost salty.

A main effect of bees collecting nectar to make honey is pollination, which is crucial for flowering plants.

Similar to honey, and usually bottled and sold as honey is honeydew, which is made from the sweet secretions of aphids, scale, or other plant sap sucking insects. Honeydew from pine forests has a "piney" taste and is prized for medicinal use in Europe and Turkey. In Europe and Turkey, honeydew is highly prized. Honeydew is unusual in that the honey is not made from the nectar of flowers but from the excess sugar secretions of aphids, most importantly the aphid Marchalina hellenica which feeds on the sap of the Turkish Pine. Honeydew in these regions has a strong piney taste and is thought to be of medicinal value. Bees collecting this resource have to be fed protein supplements, as honeydew lacks the protein-rich pollen accompaniment gathered from flowers.

Other sources stat that Honeydew nectar is produced from a small scale insect (Ultracoelostoma assimilie) living in the bark of two of New Zealand's beech forests, mostly black beech (black from the sooty mold growing on the surplus nectar covering the trunks and branches) and to a lesser extent, red beech. In the early morning sunlight, the droplets of nectar glisten like the morning dew, giving the name honeydew. Honeybees gather this nectar to produce honeydew, a process they carry out in many other countries in the World, most notably in Germany's "Black Forest".

Southern Rata is one of several species of Rata found in New Zealand but is the one that most regularly produces a honey crop, although even this honey is sometimes in very short supply. Anyone who has seen the Rata flowering in January in the Otira Gorge west of Christchurch cannot forget the sight of this brilliant red carpet covering the mountains. This area produces the purest Rata honey, very white in color with a subtle, distinctive flavor, mild and rich - but not sweet, almost salty, considered by many to be the best of New Zealand Honeys.

Also commonly known as "Borage", this wild flower covers the hills of the Central South Island in a sea of brilliant blue color during summer months. The seed, resembling a Viper's head, was once mistakenly used as a treatment for snakebite giving the plant its unusual name. Vipers Bugloss honey has a delicate flavor with a "chewy" texture. Hint: Keep this in the refrigerator and you have a natural chewy snack for kids of all ages.

Found extensively throughout New Zealand's Canterbury and Otago Provinces in the South Island, and Hawkes Bay in the North Island, Nodding Thistle flowers in late summer with a brilliant large mauve head characteristic of thistles to produce a magnificent light colored honey with a perfumed floral bouquet and subtle flavor - perfect for those who like a mild honey.

Kamahi is a common tree found in many of New Zealand's rugged native forests, and is an excellent source of honey. The creamy colored flowers are very attractive to bees and bloom in abundance throughout the Spring producing a light amber honey with a distinctive, full-bodied complexity of flavor preferred by many honey connoisseurs.

The 'beaujolais' of honeys, Tawari is best savored when young. Its origins are the lowland forests of New Zealand's far north where the elegant tree's waxy white flowers prized by ancient Maori gift the bees a light yellow nectar with a lingering butterscotch flavor. So subtle and mild, it's perfect for topping pancakes, waffles or ice cream.

Rich and malty, this honey is full bodied yet not overly strong and has a beautiful burnished amber hue. And because the distinctive clustered red flowers of this New Zealand Honey suckle may not bloom well each year. A hint of rustic woolsheds pervades the complex aroma. Rewarewa is a great natural sweetener for hot drinks.

With a heritage dating back to the ancient tribes who cultivated the arid, unforgiving soils of the Mediterranean, Thyme continues to flourish today across Central Otago's similarly challenging environment. Its burnt grass coloring so aptly reflects the surrounding landscape. An intensely aromatic honey, the pale Thyme flowers imbue it with lingering, herby, savory flavors enjoyed by the experienced honey connoisseur.

The main uses of honey are in cooking, baking, spreading on bread or toast, and adding to various beverages such as tea. Because honey is hygroscopic (drawing moisture from the air), a small quantity of honey added to a pastry recipe will retard it from becoming stale. Raw honey also contains enzymes that help in its digestion. It also contains several vitamins and antioxidants.

Honey is a main ingredient in the beverage, mead, which is also known as "honey wine".

Honey is also used in traditional folk medicine. It is an excellent natural preservative.

Most vegans avoid honey because it is technically an animal product, using alternatives such as golden syrup.

It should be noted that without commercial beekeeping, the large-scale fruit and vegetable farming, and some of the seed industry would be incapable of sustaining itself since many crops are pollinated by migratory beekeepers who contract their bees for that purpose.

In addition to its use as a sweetener, all honey has antibacterial properties and can be used as burn and wound dressing. Manuka, a strong tasting monofloral honey from New Zealand, has been shown to have greatly increased antibacterial activity and has become widely marketed for this property.

Honey may also be used in homemade beauty remedies and an inexpensive anti-acne treatment 1.

Honey is, however, not always healthy. Because it is gathered from flowers in the wild, there are certain times and places when the honey produced is toxic, see Grayanotoxin. Rhododendrons and azaleas have nectar that is poisonous to humans although harmless to bees, producing the toxic honey. In some areas of the world the hives are emptied immediately after the flowering season and cleaned of any residue to prevent accidental poisoning. Such poisonous honey is very rarely encountered. The shape of the Azalea flower makes access to nectar difficult for honeybees, and during the time at which Azaleas bloom there are almost always other flowers in bloom that are more appealing to the honeybee.

Honey (as well as other sweeteners) is also potentially extremely dangerous for infants. This is because, when mixed with the non-acidic digestive juices of an infant it creates an ideal medium for botulinum spores to grow and produce toxin. Botulinum spores are among the few bacteria that survive in honey, but also are widely present in the environment. While these spores are harmless to adults, because of stomach acidity, an infant's digestive system is not yet developed enough to destroy them, and the spores could potentially cause infant botulism. For this reason, it is advised that neither honey, nor any other sweetener, should be given to children under the age of 18 months.

In the hive, there are three major classifications of bees: 1 queen bee, up to about 200 drone bees, and about 20,000 to 80,000 worker bees. Worker bees are responsible for the major collection of honey. In the typical day, the worker bee will go out to collect nectar, store it in the crop, and fly back to the hive. As it leaves the flower, the bee will release nasonov pheromones. This allows many other bees to find their way to the site by smell. Honeybees also release nasonov pheromones at the entrance of the hive, which allows other worker bees to find their way back in faster and easier. Upon the bee's arrival, it will regurgitate the nectars from the crop into the wax pit. Nectar, as collected from a flower, has a high water content which combined with the natural yeasts in the nectar would cause it to ferment. The bees "fan" their wings inside the hive creating a thorough draught, which in turn, evaporates much of the water out of the nectar. When the water content is less than about 13%, the high sugar concentration is sufficient to stifle fermentation. This highly concentrated sugary fluid is what we call honey. Beekeepers can remove this, and bottle it for consumption, safe in the knowledge that the product will have a long shelf life with no risk of fermentation. Mead, (a wine made from honey) relies on exactly the process stated above, to create the alcohol however the wild yeasts are normally removed by boiling, and specific wine-grade yeast is added to start the fermentation.

Honey as a product

This is a popular honey product. Instead of processing, the honey is harvested still in the wax comb.

Other forms of honey as defined by the National Honey Board