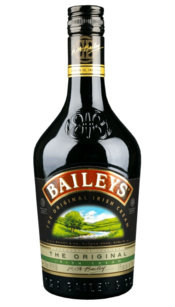 Irish cream is a cream liqueur based on Irish whiskey, cream, and other ingredients such as coffee, which can be served on its own, as an alcoholic substitute for milk/cream and sugar in a hot coffee (sometimes with whipped cream added on top), or used in mixed drinks or as part of a shot or a whole shot. Irish cream's largest markets are the United Kingdom, Canada, and the United States.

Irish cream typically has 15 to 20% alcohol by volume (ABV), with a proof level of 30 to 40. The brands of Irish cream include Baileys, Cremór,[1] Kerrygold, Carolans, Molly's, Brogans, Saint Brendan's and Coole Swan,.