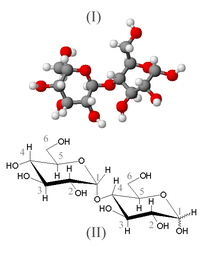 Maltose (/ˈmɔːltoʊs/[2] or /ˈmɔːltoʊz/[3]), also known as maltobiose or malt sugar, is a disaccharide formed from two units of glucose joined with an α(1→4) bond, formed from a condensation reaction. The isomer isomaltose has two glucose molecules linked through an α(1→6) bond. Its chemical formula is C12H22O11

Maltose is the second member of an important biochemical series of glucose chains. Maltose is the disaccharide produced when amylase breaks down starch. It is found in germinating seeds as they break down their starch stores to use for food, which is why it was named after malt. It is also produced when glucose is caramelized.