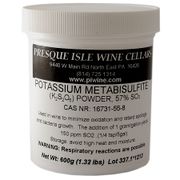 Potassium metabisulfite, K2S2O5, also known as potassium pyrosulfite, is a white crystalline powder with a pungent sulfur odour. The main use for the chemical is as an antioxidant or chemical sterilant. It is a disulfite and is chemically very similar to sodium metabisulfite, with which it is sometimes used interchangeably. Potassium metabisulfite is generally preferred out of the two as it does not contribute sodium to the diet.

Potassium metabisulfite is a common wine or must additive, in which it forms sulfur dioxide gas (SO2). This both prevents most wild microorganisms from growing, and it acts as a potent antioxidant, protecting both the color and delicate flavors of wine.

Winemaking equipment is sanitized by spraying with a 1% SO2 (2 tsp potassium metabisulfite per L) solution.

Potassium metabisulfite is sometimes used in the brewing industry to inhibit the growth of wild bacteria and fungi. This is called 'stabilizing'. It is also used to neutralize chloramine that has been added to tap water at the source as a disinfectant. It is used both by homebrewers and commercial brewers alike. It is not used as much for brewing beer, because the wort is almost always boiled, which kills most microorganisms. It can also be added to strike water (the water used to mash the malted barley) in order to remove chloramines which can cause phenolic off flavors in beer.