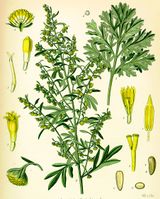 The plant Artemisia Absinthium, proverbial for its bitter taste. The leaves and tops are used in medicine as a tonic and vermifuge, and for making vermouth and absinthe; formerly also to protect clothes and bedding from moths and fleas, and in brewing ale. It yields a dark green oil. Roman wormwood is A. pontica or A. Absinthium; sea wormwood is A. maritima.

From Renfrow 1994: Wormwood contains thujone, which can cause brain damage; it is addictive, with habitual use also causing vomiting, tremors, vertigo, hallucinations, violent behavior, and convulsions. Absinthe was deemed responsible for many deaths, and has been banned in several countries since the turn of the century. (McGee, p. 160. Merck, p. 2.)