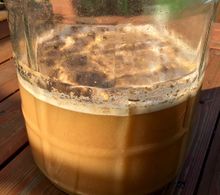 Barm during ferment in a carboy

The yeasty foam that rises to the surface of fermenting malt liquors.

Also a commercial leavening agent containing yeast cells; used to raise the dough in making bread and for fermenting beer or whisky.

Term used to describe the yeast residue left in a sour mash after fermentation. Some of this barm is re-used in subsequent mashes as part of the sour mash method.

In Australia, barm left over from beer is used to make vegemite, a popular spread used on sandwiches.