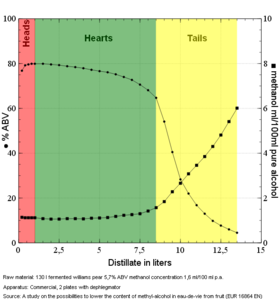 Methanol is associated with wood alcohol, and is not produced in any harmful quantity in a standard grain or fruit mash. However, it is produced in small quantities. For many years the community at homedistiller believed that methanol was mostly concentrated in the heads. However, studies have shown that methanol is present in the distillate all the way through production into the tails. The ratio of methanol-to-ethanol in the distillate actually rises through the run, initially fairly slowly through heads and hearts but peaking in the tails. Note that this does not mean there is more methanol in the tails, because at the same time during the distillation run the ABV is falling, so the total amount of methanol will also fall. See the graph of an eau de vie distillation run, and note that the key shows the points plotted as dots are on the left scale record % ABV, and the points plotted as squares are on the right scale, recording mL of methanol per 100mL pure alcohol (not the percentage methanol in the distillate).

Once ingested, methanol is metabolized into formic acid via formaldehyde in the liver. Formic acid causes damage to the optical nerves, resulting in blindness.

The amount of methanol produced in fermentation is not enough to cause harm. Even when water is separated from the ferment by distillation, the total volume of methanol in a final spirit is significantly less than that required to cause damage. The high ratio of ethanol-to-methanol in spirits actually buffers the methanol, slowing the rate a body metabolizes the methanol and allowing the body to process and manage the formic acid metabolic products safely.

A study on the possibilities to lower the content of methyl-alcohol in eaux-de-vie de fruits.