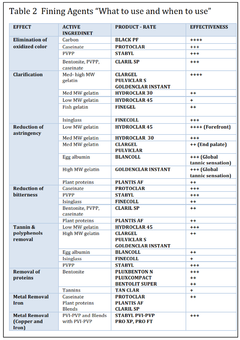 Agents such as bentonite (powdered clay), gelatin or egg white, which combine with sediment particles and cause them to settle to the bottom of a beer or wine where they can be easily removed. This process is called fining.

Finings (the term is a mass noun rather than a plural) is a substance used to aid the clearing of beer, particularly cask ale.

One of the defining characteristics of real ale is that it is not filtered or pasteurized, so that the live yeast remains in the container from which it is served. This allows secondary fermentation to continue and more complex flavors to develop. Actually drinking this yeast, however, would be somewhat unpleasant, and so it is necessary to gradually remove it from the beer before it can be served. This is the purpose of finings.

Finings is a thick liquid, usually made from the swim bladders of fish although alternatives exist. Around a pint per 9-gallon firkin is added to the beer, invariably these days at the brewery when the beer is racked into the cask. The finings will begin to act on the beer immediately, but the movement associated with transport will ensure that the yeast remains mixed throughout the cask. Once the cask is placed on the stillage or serving position, vibration and movement will be avoided and the cask can begin to clear.

The way in which fining works is complex - the CAMRA Cellarmanship guide states that it is "partly physical and partly electro-chemical". The process consists of three stages: the solids in the beer first "flocculate" into loose clumps, then the clumps join together into bands or layers, and the layers finally migrate towards the top and bottom of the cask. The band at the top of the beer ("top break") is why the last pint drawn from the cask may be cloudy and have to be thrown away.

If a cask is transported a long way, with many interruptions in which the beer clears as if on the stillage, the finings may become "tired" and cease to work. For this reason, ale brewers selling to large pub companies try to avoid having their casks transported through the same centralized distribution chain as the company's more stable packaged drink supplies, preferring to deliver their beer direct or through a local intermediary. Since around 2004 pubcos have become increasingly willing to consider such arrangements.

It is possible to revive a cask with worn-out finings by adding a fresh batch, but many if not most landlords are not prepared to undertake this.

Because most finings is made from fish parts, it may be an issue for vegetarians.