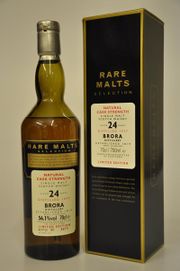 Scotch whisky, often called simply Scotch, is a distilled spirit made in Scotland. (The Scottish and Canadian spirits are spelled "whisky"; the Irish and American ones "whiskey"). The main distinction in the flavor of Scotch is from the use of peat(partially decayed vegetable matter used as fire source) in the process of roasting the malt. To use the word "SCOTCH", the whisky should be aged/matured for a minimum of 3 years in Scotland. The name whisky is a transformation of the word usquebaugh, itself a transformation of the Scottish Gaelic uisge beatha spelled uisce beatha in Irish Gaelic, literally meaning the "water of life".

Whisky has been produced in Scotland for hundreds of years. It is generally agreed that Dalriadan Scots monks brought distillation with them when they came to Caledonia to convert the Picts to Christianity in the fourth and fifth centuries A.D. Friar John Cor recorded the first known batch of scotch whisky June 1st 1495. The first taxes on whisky production were imposed in 1644, causing a rise in illicit whisky distilling in the country. In 1823, Parliament eased the restrictions on licensed distilleries, while at the same time making it harder for the illegal stills to operate, ushering in the modern era of Scotch production. The requirement of maturing the whisky for 3 year originated during world war one when the government wanted to limit the amount of alcohol available for consumption. 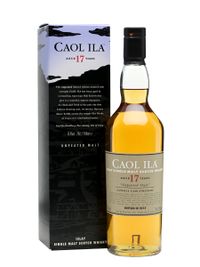 Grain whisky distillation begins when the grain, usually wheat or maize (called "corn" in North America),or unmalted barley, is mashed with water. An enzyme, needed to break down starches in the grain to sugars, is added, followed by yeast to begin fermentation. Grain whisky is distilled in a continuous operation in a Patent still, also known as a Coffey Still after Aeneas Coffey who developed it in 1831. Only seven grain distilleries currently exist, most located in the Lowlands (central Scotland). They produce the majority of spirits (whisky before it has been aged) used in blended whisky.

Malt whisky distillation begins when the barley is malted, or allowed to begin germination. Malting releases enzymes that breakdown starches into sugars. The malted barley is then dried, often over peat fires, which adds much of the flavor to the final product. The dried malt is ground and soaked in water, dissolving the sugar and producing wort, the sugary liquid. Yeast is then added, and the wort is allowed to ferment. The liquid, now at about five per cent alcohol, is called wash. The wash is moved into the pot stills for the first of two or three distillations. Once all the distillations are complete, the unaged spirits has an alcohol content of about 60 per cent by volume.

Once distilled, the product must be left to mature in specialized barrels called casks; usually these casks previously contained sherry or bourbon, but more exotic casks such as port, cognac, calvados, and Bordeaux wine are sometimes used. Bourbon production is a nearly inexhaustible generator of used barrels, due to a regulation requiring the use of new oak barrels. The aging process results in evaporation, so each year in the cask causes more loss of volume, making older whisky more expensive to produce. The 0.5-2.0% lost each year is poetically known as "the angels' share". The distillate must age for at least 3 years to be called Scotch whisky, although most single malts are offered at a minimum of 8 years of age. Some believe that older whiskies are inherently better, but others find that the age for optimum flavor development changes drastically from distillery to distillery, or even cask to cask. Older whiskies are inherently scarcer, however, so they usually command significantly higher prices.

Color can give a clue to the provenance and type of whisky, although the addition of spirit caramel, legal in most markets, can be used to darken an otherwise lightly colored whisky. Old, sherried, whisky is usually very dark in color - think Coca-Cola. Old, un-sherried, whisky is usually a golden-yellow/honey color. Some whiskies can be almost clear, even after 10 years and more in wood. The late 1990s saw a trend towards fancy 'wood finishes' - reracking whisky from one barrel into another of a different type to add the 'finish' from the second to the maturation effects of the first. The Scotch Malt Whisky Society bottling number 1.81, for instance, is known by some as "the green Glenfarclas": it was finished in a rum cask after 27 years in an oak (ex-Bourbon) barrel and is the colour of extra-virgin olive oil; this is an homage to the legendary "Green Springbank", also aged in rum casks.

Many whiskies are chill filtered before bottling. This is a process in which the whisky is chilled to near 0°C (32°F) and passed through a fine filter. This removes some of the compounds produced during distillation or extracted from the wood of the cask, and prevents the whisky from becoming hazy when chilled, or when water or ice is added.

However, chill filtration also removes some of the flavor and body from the whisky; some consider chill-filtered whiskies to be inferior for that reason. Whiskies that have been bottled at 46% or greater alcohol by volume are usually not subjected to the process. 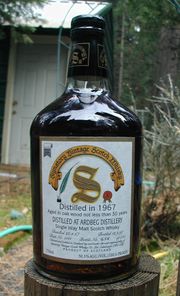 If the whisky comes from one cask only, it frequently referred to as Single Cask. Whisky in the cask, depending on the age and the initial filling strength, can exceed 60 per cent alcohol by volume. Most whiskies are bottled at between 40 per cent (the minimum legal limit) and 46 per cent alcohol by volume; if the whisky is not watered down, or is slightly watered down but still at a relatively high strength, it is frequently labeled Cask Strength. Note that Cask Strength Scotch does not have to be from a single cask, i.e. a Single Cask Scotch, nor vice versa, although this is often the case.

Scotland is traditionally divided into several regions (between six and nine) for the classification of single malts; to a greater or lesser degree, the whiskies in a given region may have similar characteristics. The regions are:

The Classic Malts are a collection of six single malts chosen to represent the different distilling regions. The whiskies were selected by United Distillers from the company's own distilleries. Despite the collection's beginnings as a marketing campaign, they now are considered by many of being the representative malts for each region.

A Blended Scotch Whisky combines grain and malt whiskies from several different distilleries. This is normally cheaper and generally considered inferior to single malt, with a few noted exceptions. However, over 90 per cent of the whisky produced in Scotland is blended Scotch. Blended Scotch Whiskies generally contain between 10 and 50 per cent Malt Whisky, with the higher quality brands having the highest per cent malt. Master Blenders combine the various malts and grain whiskies to produce a consistent "brand style'. (To quote Sean Connery: "Scotch, straight up. Any Single Malt will do.") Notable blended Scotch whiskies include Johnnie Walker, Cutty Sark, Famous Grouse, and Chivas Regal.

While blended whisky is indeed usually considered inferior, those making this judgment are not necessarily comparing like with like. Often a basic blended whisky is compared with a single malt costing three times as much. If the comparison was made at the same price point, blends might be found to be the equals of the single malt, especially as fashions now mean that single malt can command higher prices. After commentators have for years been encouraging people to try single malt, now some are encouraging people to discover the better blends. In quoting the name of a blend, you should always bear in mind that most blends are available in a range of versions, ages, qualities and costs. For instance, Johnnie Walker Red label at around US$30, or Blue Label, costing over US$200, and which may contain some whiskies as old as 50 years.

Another recent trend is the release of Single Grain Scotch Whisky, which, as its name suggests, is unblended grain whisky from a single distillery. Single grain whiskies include Black Barrel and Cameron Bridge. 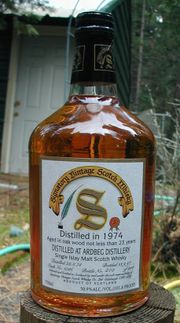 An Ardbeg whisky bottled by Signatory

Most malt distilleries sell a significant amount of whisky by the cask for blending, and sometimes to private buyers as well. Whisky from such casks is sometimes bottled as a single malt by independent firms such as Cadenhead, Murray McDavid, Signatory, and others. These are usually labeled with the distillery's name, but not using the distillery's trademarked logos or typefaces. An official bottling (or proprietary bottling), by comparison, is one from the distillery (or its owner). Most independent bottlings are from single casks, and they may sometimes be very different from an official bottling.

There have been occasional efforts by distillers to curtail independent bottling; Allied Distillers (owner of the Laphroaig distillery) initiated legal action against Murray McDavid in an effort to prevent them from using "Distilled at Laphroaig Distillery" in their independent bottlings of said whisky. Murray McDavid subsequently used the name "Leapfrog" for a time, before Allied backed off.

William Grant & Sons, which owns three malt distilleries, goes so far as to add a measure of one of its other distilleries' output to each cask of blending malt it sells, specifically to prevent it from being bottled as a single malt.

By contrast, whisky from the Caol Ila distillery is very commonly bottled by independent bottlers, and official bottlings have sometimes been hard to find. Some independent bottlings do not reveal the source of the whisky, using an alias or a geographical name instead.